Conveyor Oven is a great site for restaurants where the efficiency has priority. It cooks similar dishes consistently with speed, simplicity and high volume. Pizza is the most common type of items uses conveyor oven. That is why sometimes we call these ovens, Pizza Conveyor Oven. The other most common food that uses this oven is sandwich.

However, Conveyor Oven is suitable for various of food with a simple operation and perfect result.

Pizza Conveyor Oven is ideal for high-volume pizzerias in search of a steady oven not requiring constant attention. Conveyor pizza ovens use a conveyor belt to cook food as it moves through the oven and like all other Commercial Ovens, conveyor ovens consist of two different ovens. Electric Conveyor Oven and Gas Conveyor Oven

Force impingement technology is the most common method applied in conveyor ovens. The fans blow hot air, which is heated by gas or electric burners and hot air is able to through perforations to create high-velocity jets to blow cold air surrounding food away. This method results in rapid heat transfer and nice texture.

The heating elements are located above and below the belts. Both air inside the oven and interior walls are heated at the same time to create radiant heat. 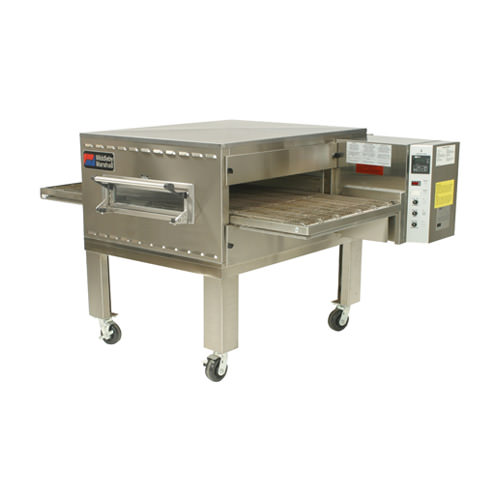 There are several control opinions from simple mechanical controls consisting of a basic dial to sophisticated electronic. The electronic elements provide a programable setting that is able to store times, speed and temperature in oven memory. High technique model also comes with easy-to-read LCD displays and touch pad control. Users could make the decision based on their menu and traffic.

Conveyor Ovens are sorted by their belt dimension. When purchasing, customers need to pay attention to length, which determines the volume of throughout that can be achieved within in unit time. 40 to 50 inches belt are best sellers since they are large enough as a primary oven for any busy pizza store. Smaller places could choose ovens with 31-36 inches belts to save some space with a reasonable output. Places require especially high production should consider length over 78 inches.
Belt width is another key factor. The most popular size is 16 inches, which means the maximum width of the food the oven can accommodate.  It is not hard to find large units with nearly doubled width. With a wider belt, the output is doubled by placing two items side-by-side.

Besides the common single-piece, there is an option with split-belt or dual belt allowing user simultaneously cook different items. Two belts could be set at different speeds, therefore the item placed on the slower belt could be baked longer than the one on the faster belt.  Most of the units are split by half, however, for the place offer both huge amounts of large and small items, the 30/70 will be a better choice.

The efficiency and easy operation is the most obvious advantage which is able to less labor pool. After setting speed and temperature, the user could place items on the input end of conveyor end. The belt will carry foods through the baking chamber and to the other end with the landing platform. Hence, conveyors are able to provide a consistent quality than another oven and it is nearly impossible to overbake items since food is perfectly timed by settled speed. Moreover, forced air cooking forms a membrane around food not only to speed up the cooking time but also to protect them from drying out.

Buying Guide | Food Prep RefrigerationBuying Guide | Refrigerated Display Case
We use cookies on our website to give you the most relevant experience by remembering your preferences and repeat visits. By clicking “Accept All”, you consent to the use of ALL the cookies. However, you may visit "Cookie Settings" to provide a controlled consent.
Cookie SettingsAccept All
Manage consent

This website uses cookies to improve your experience while you navigate through the website. Out of these, the cookies that are categorized as necessary are stored on your browser as they are essential for the working of basic functionalities of the website. We also use third-party cookies that help us analyze and understand how you use this website. These cookies will be stored in your browser only with your consent. You also have the option to opt-out of these cookies. But opting out of some of these cookies may affect your browsing experience.
Necessary Always Enabled
Necessary cookies are absolutely essential for the website to function properly. These cookies ensure basic functionalities and security features of the website, anonymously.
Functional
Functional cookies help to perform certain functionalities like sharing the content of the website on social media platforms, collect feedbacks, and other third-party features.
Performance
Performance cookies are used to understand and analyze the key performance indexes of the website which helps in delivering a better user experience for the visitors.
Analytics
Analytical cookies are used to understand how visitors interact with the website. These cookies help provide information on metrics the number of visitors, bounce rate, traffic source, etc.
Advertisement
Advertisement cookies are used to provide visitors with relevant ads and marketing campaigns. These cookies track visitors across websites and collect information to provide customized ads.
Others
Other uncategorized cookies are those that are being analyzed and have not been classified into a category as yet.
SAVE & ACCEPT