Charbroiler is one of the restaurant equipment that is used to cook variety of meats and seafoods such as juicy burgers, steaks and a fabulous chicken breasts. Commercial Charbroilers, Restaurant Charbroilers and Char Grills offer a home-cooked taste, and professional appearance with both the speed and convenience that is needed in a restaurant.

Countertop Charbroilers are the most common charbroilers that are being used in every restaurant and commercial kitchen. As it name implies they are built to sit on the equipment stand or chef base refrigerator in a restaurant. The electric models are not very common and you can choose between Radiant Charbroilers and Lava Rock Charbroilers.

Outdoor Charbroilers or Outdoor Chargrills are the heavy duty version of home BBQ machines. They normally use in catering events, hotels and gulf courses. They are normally free standing and come with stand, side burners for other prep and lids.

One of the main differences between all charboilers are how their heats transfer. This is a most common question for every one who wants to buy a charbroiler for the first time.

Lava Rock Charbroilers use a bed of Lava Rock positioned above the burners to catch the heat and radiate it towards the meat above. Because the rock is porous, it catches and holds drippings, which enhances the delicious smells by creating more flavorful smoke. This level of flame and smoke looks great in display cooking applications, and most chefs prefer this style and believe it adds more flavor to the food. These models require more maintenance and cleaning compared to a radiant charbroiler.

Radiant Charbroilers burner is positioned under a cast metal radiant from which the heat is radiated towards the food being grilled. Some new models uses staineless instead of cast metal which gives better radiation compare to the cast iron. Sub-radiant heating offered with some broiler units reduces gas use and grease fires, while improving the evenness of top grid temperatures. Radiant Charbroilers are much easier to clean than a comparable lava rock model. 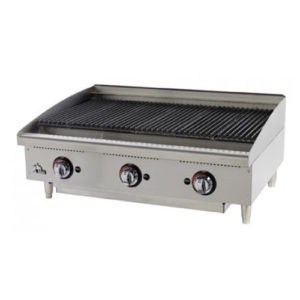 Like many other restaurant equipment require routine cleaning and maintenance. This will help in long lasting and result in better cooking performance. When using the charbroiler for the first time is important to let it on before cooking on it since they all have some sort of protective coating on the grates that you’ll need to burn off. Every day after finishing to work with you charbroiler, you need to first empty the grease tray and using the Wire Brush to remove stuck-on grease and carbon buildup.

Buying Guide | Commercial Convection OvenBuying Guide | Commercial Fryer
We use cookies on our website to give you the most relevant experience by remembering your preferences and repeat visits. By clicking “Accept All”, you consent to the use of ALL the cookies. However, you may visit "Cookie Settings" to provide a controlled consent.
Cookie SettingsAccept All
Manage consent

This website uses cookies to improve your experience while you navigate through the website. Out of these, the cookies that are categorized as necessary are stored on your browser as they are essential for the working of basic functionalities of the website. We also use third-party cookies that help us analyze and understand how you use this website. These cookies will be stored in your browser only with your consent. You also have the option to opt-out of these cookies. But opting out of some of these cookies may affect your browsing experience.
Necessary Always Enabled
Necessary cookies are absolutely essential for the website to function properly. These cookies ensure basic functionalities and security features of the website, anonymously.
Functional
Functional cookies help to perform certain functionalities like sharing the content of the website on social media platforms, collect feedbacks, and other third-party features.
Performance
Performance cookies are used to understand and analyze the key performance indexes of the website which helps in delivering a better user experience for the visitors.
Analytics
Analytical cookies are used to understand how visitors interact with the website. These cookies help provide information on metrics the number of visitors, bounce rate, traffic source, etc.
Advertisement
Advertisement cookies are used to provide visitors with relevant ads and marketing campaigns. These cookies track visitors across websites and collect information to provide customized ads.
Others
Other uncategorized cookies are those that are being analyzed and have not been classified into a category as yet.
SAVE & ACCEPT